The familiar white house at Brookside Farm on Society Road has been a part of East Lyme’s history from as early as 1740.  As far as what can determined from town recorded land deeds,  the property was originally owned by Abraham Avery and then taken over by his son Thomas Avery, who had this farmhouse built for his wife and family around 1845.  The date of the building is not certain but during restoration,  a newspaper dated 1845 was found in the plaster and a newspaper lining a kitchen drawer was dated 1839 according to an article in the New Haven Register, 1976.

After his wife Elizabeth died in 1852, Thomas lived there with his children and sister Elizabeth and his brother Samuel’s wife Ellen according to the 1860s Census.  By the 1880s Census, the farmhouse was occupied by William Henry Smith and his family, along with his nephew Frank Harris.   Eventually, Willliam’s son Herman Smith and Frank Harris took over the farm and lived in the house with their wives, Lula and Florence Munger until their deaths in the mid to late 1900s.

In March, 1951, Herman Smith died, leaving his wife Lula and Frank and Florence Harris to manage the farm.  On June 30, 1955,  Frank Harris and Lula Munger Smith, sold the farmhouse and according to the deed  “about 103 acres more or less” of property to the town of East Lyme with the understanding that Florence and Lula could continue to live in the house for as long as they were able.  Frank died in September, 1955 and eventually, Florence and Lula moved to a nursing home in Niantic, leaving the house vacant for a number of years.

Lula Smith died in 1972 and Florence Harris died in 1973 and by that point, the house was in a state of disrepair, boarded up and had become a target for vandalism.   Few of the windows remained and all were boarded up to protect further damage.  According to one newspaper account on 5/29/1974, “The grounds are overgrown with tall grass and brush and the house itself is beaten, weathered and in desperate need of a face lift”.

The town had considered tearing down the house due to its sorry state.  A good friend of Florence and Lula, Flora Storrs, (Head Librarian Niantic Public Library, 1959-1972), heard about this and was concerned about the news.  Flora contacted Norman Peck, President of the East Lyme Historical Society, who in turn contacted Dennis Murphy, the First Selectman with their concerns and discussed the prospects of saving this historic property.   The Board of Selectmen appointed a committee to determine whether the house should be saved.  After consulting with Old Lyme Architect, Richard I. Carter,  who declared the farmhouse a “fine example of the Greek Revival Architecture from 1850″ with a sound structure, the committee decided the house should be restored and preserved.

In May, 1974, the Smith-Harris House Restoration Committee was established.  This committee’s purpose was to to save the house from destruction and to preserve the important town history embedded in this farmhouse and property by restoring it so that it could function as a town museum.  Selectman Ernest Sartor chaired the committee, which consisted of members of the East Lyme Historical Society, Parks and Recreation Commission and the Planning and Conservation Commission.

Members of the committee included:

The Board of Selectmen set aside $10,000 in their 1974-75 budget to fund the restoration and in the summer of 1975, restoration of the property began.   After the town developed a portion of a property to be used for public buildings; two schools and a library/senior center and park and recreation offices,  about 25 acres remained with the farmhouse.

According to Historic Register Application,  some agricultural artifacts still remained on the property:

The East Lyme Historical Society thought the house should be restored to an 1850s farmhouse on the first floor and the second floor could be used for storage and caretaker quarters.  Other possible plans include returning the property to a working farm.

The restoration process continued from 1974 to 1978.  According to the Historical Register Application, “All research and architectural planning for the restoration was done by Robert I. Carter. He recommended contractors and supervised construction. The ad hoc committee relied solely on his judgment for ground floor restoration which is the area by the public and specifications for altering of the bedroom floor to accommodate an apartment for the curator.”

Fred Odgers, a carpenter who specialized in historic restorations and David Long of Foremost Construction worked together to repair the interior and to add electricity and electric heat.  Fred Odgers did most of the work constructing a curator apartment on the second floor and recreated the attic window above the front door in a Chinese Chippendale style.

In a 2/20/76 article in The Day, work in progress at this time included removing the second floor kitchen above the one story kitchen ell at the back of the house.
The roof on the main part of the house have been replaced and a new roof would be placed on the existing kitchen ell (first floor).

The committee at that time was seeking additional funds to complete the work.  The hope was that the house would be accepted to the National Historic Register so that they would be eligible for historical grants.  In the meantime, work was being funded through town monies and private donations.  At this point estimates to restore the first floor totaled $17,000.  The goal was to have the house restored in time for the Town Bicentennial celebration.

In a 4/15/76 article in The Day, an update on the restoration work was offered:
At a recent Commission meeting, Contractor David Long, Fred Odgers and Robert I. Carter reported it looked promising that all work should be done by the June 4th deadline.  About $3000 was needed to repair two chimneys in order to safely use them.   In addition, the exteriors of the two chimneys need to be completely replastered.
Other work in progress included repairing the windows, replacing the kitchen sashes, doors have been stripped and replaced and the original flooring had been exposed with little repair needed.  So far, $16,000 has been spent on the first floor, not including the additional $3000 needed for the chimneys.  $20,000 was allocated from the Town of East Lyme budget.

Students from the high school National Honor Society helped to paint the interior, repair a stone wall, set up the barn as a picnic area,  plant four young apple trees donated by the East Lyme Garden Club and clear the yard.

According to an article in The Day, 8/14/1975, workers from the Thames Valley Council for Community Action Group had hand sanded all the wooden surfaces in the house, taken up the floors, and removed the damaged ceilings and walls.

Over the four years, $58,500 was spent by the Town of East Lyme on the restoration work.

As part of the Bicentennial celebrations,  the Smith-Harris House was officially opened on Saturday, July 3, 1976 as a museum of furniture and tools from the early to mid 19th century. By this time, the exterior work and restoration of the first floor was complete. The work was a result of a combined effort of the Board of Selectmen, the Planning Commission, the Parks and Recreation Commission, the Conservation Commission, the East Lyme Historical Society, the Junior Woman’s Club and the Bicentennial Committee, the East Lyme Garden Club, East Lyme High School Students, and the Thames Valley Community Council Action Group. Ernest Sartor headed the project.  After the opening in 1976,  restoration work continued to complete the apartment on the second floor.

On February 22, 1978,  it was reported in The Day that The East Lyme Board of Selectmen has applied for a Connecticut Fund for Restoration of Historic Assets grant in the amount of $4680 to complete restoration of the house.  If grant monies were awarded, they would be used to purchase 19th century furnishing and appliances for the house.  One essential item to be considered is a wood-fired stove for heating and cooking.

At this point, the Board of Selectmen are feeling the burden of overseeing the restoration and future supervision of the events of the house.  They consider and approve an ordinance to appoint a seven member Smith-Harris Commission.  The Commission would “regulate use of the town-owned building on Society Road and would establish fees for its use by local organizations”.

On April 11, 1978, The Day announced the Board of Selectmen has appointed seven residents to serve on the newly formed Smith-Harris House Commission:

Some of the members were involved with restoring the house and researching the history, while others were members of the East Lyme Historical Society.

In May, 1978, the town received a state grant of $4500 from the state Committee for Historic Preservation to help fund further restoration.  The money was authorized to be distributed from a $1 million historic preservation state bond package.  The grant monies would be used to recreate a bake oven, a fireplace and a wood-burning iron range.  Betty Morrison and Mrs. Willetts were credited with navigating through the lengthy application process.  Also at this time,  Mrs. Sarah Fenick had been named as Interior Decorating and Furnishing Consultant for the house.  The plan was that the Fred Odgers family would live in the house for a year to complete restorations, be caretakers and provide historic demonstrations authentic to the history of the house and the town of East Lyme. 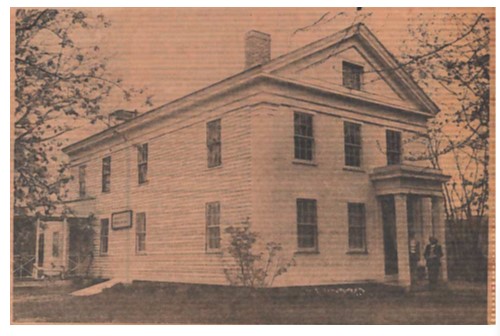 The Hartford Courant reported on 7/11/78 that work on the upstairs apartment was almost completed and should be ready for the curator and family to move in by August 1st.   The house would be open on a regular basis to the public for about 5-6 hours in the afternoon once the family moved in.  The planned restoration was about 80% complete and work on the kitchen fireplace, which was funded by the grant was nearly done.  The commission had applied for acceptance on the National Register for Historic Houses and were awaiting their response.   Ongoing plans included restoring an existing corn crib and building a barn that no longer exists but would be replicated from 1916 photographs.

The Day reported on 9/12/78 that “The Smith-Harris farmhouse of East Lyme opened officially on Labor Day weekend.  Attendance was small, consisting of two adults, one lost traveler, three girls, three horses and 37 rabbits”.   There was a new picnic table that was donated by the Niantic Lions Club and the house would be open every Saturday and Sunday from 1-5, free of charge.

Now known, as Brookside Farm Museum,  the Commission and Friends of this important historic property are still working hard to maintain the property and keep it open and affordable for educational and historical purposes.   As part of a strategic planning process three years ago,  the property was renamed Brookside Farm Museum and the goals were realigned to the original purpose of  showcasing this property as a farm museum.  The preservation of this property has been a result of dedication and diligent work from many community partners and citizens of East Lyme over the last 45 years.

The Brookside Farm Museum Commission and Friends welcome continued support from any community group or individual who is interested in being involved with preserving and promoting the history of Brookside Farm.  If you would like to help, please contact Gary Lakowsky,  Commission Chair,  at brooksidefarmmuseum@gmail.com.

Morrison, Betty. “Chronology of the Restoration of the Smith-Harris House.” about 1981: n. pag. Print.